The Runners and Riders in the Scottish Ladies Championship

Now, here’s a rum thing.  Hot on the heels of my thoughts on falling numbers, tippex-scribbled laptops and recruitment officers, I have just taken a look at the 2013-2014 Scottish Ladies Championship runners and riders.  You would have thought, would you not, that, in the absence of the reigning Scottish and World champions (and that’s another discussion), the cream of Scottish Ladies curling might have thought to themselves, in a moment of blinding logic, that, if you had an ambition to win your national championship, this might be about as good a year as any to wander off to the curling cabinet, get out the old Bally shoes, scrub down the Thistle brush and wander down to the rink for a wee practice before the championship onslaught.


I would have thought so anyway.  You would not have seen me for dust.  In fact, so enthused was I about the whole thing that I got as far as the cupboard before I realised that there was just one small thing I had forgotten about and that was that.


So – how come only seven entrants?  Search me.  And who is going to win.  I think the answer is – well, it depends.


Regular readers will remember that I wrote a couple of months ago about the fifth player for the Olympics.  Since I wrote the blog by the way, it has been announced that Scott Andrews, Tom Brewster, Greg Drummond, Michael Goodfellow and David Murdoch, who will skip the rink, have been chosen to represent GB at the Olympics in the men’s competition.  This is a good thing, in my view and all of British curling wish them well.


But, the fifth lady has not yet been announced.  There was much harrumphing when I suggested that Kelly Wood might be a surprise choice (Kelly currently lives in Canada).  Assuming that she is not chosen, then it seems only logical that the fifth player will come from – one of the seven teams competing in the Scottish.  This will make life very difficult for the rest of the team for the simple reason that they have been robbed of a quarter of their team, and most likely a top-end player, to boot.  Presumably, the player concerned will not be able to compete in the Scottish for the same reason that Eve Muirhead, Anna Sloan, Vicky Adams and Claire Hamilton are not able to compete.  And that will be that, then.


The most obvious contender and heir apparent is Hannah Fleming’s strong team.  They were runners-up last year and in fact had the beating of Eve’s team in the round-robin.  They did not perform as well as they might have in the final, but they are still a strong looking outfit.  Former team mate, Alice Spence replaces Abi Brown who is concentrating on her fourth year studies at university.  Alice and Jennifer Dodds are a strong front end.  Lauren Gray remains at third.


Team Fleming is a funded team so, logically, there is a fair chance that the fifth player will come from their number.  Both Alice and Lauren have been fifth player to Eve and co in the past (and Lauren is going to the European Championships in that capacity this time round), but all four are fine curlers, so any one of them could be picked.


Lorna Vevers, Sarah Reid, Rebecca Kesley and Rachel Hannen look strong as well.  I should report to an enthralled readership that Rebecca recently won the Currie and Balerno points competition, so her confidence is at an all-time high!  Lorna has been there and done it for longer than she will care to remember, Sarah is a gold medal winning World junior champion skip in her own right and Rebecca and Rachel again are a strong front end.


Gail Munro will be back, though there is an element of uncertainty about exactly who she will be with at the championships, given that her three team mates are listed as TBA, TBA and TBA!  It must be the water in Stranraer, or something.  Suffice it to say that if Gail gets her mojo going, the others had better play well to get past her.


There are three younger teams taking part, skipped by Gina Aitken, Jennifer Marshall and Jennifer Martin.  I think that they will compete and will have the beating of some of the other teams.  Will they win the championship?  One of these days, many of them will, but maybe not this season.


So I am leaving Kerry Barr until last.  She is flying quietly under the radar and she and her three team mates, Rachael Simms, Rhiann Macleod and Barbara McPake are all bloody good curlers and chums as well.  They are playing entirely for the fun of it and I think that their innate talent mixed with a wee hint of devil-may-care and topped by some luck along the way – well, you never know!


The competition dates are Friday 29th November to Sunday 1st December 2013 at Dumfries Ice Bowl and then from Monday 10th to Sunday 16th February 2014 at Dewars Centre, Perth.  The format for this year will be a double round-robin followed by a mini page play-off with the top 3 teams from the round-robin progressing.


Ah.  Maybe that’s why there are not so many entries.  Most of the competitors have jobs and other pesky things like that.  You know the kind of thing: you get up in the morning at some ungodly hour; you get on a bus; you commute into your place of work and you earn enough spondulacks to put the tatties on the table.  That pesky thing.
Could we not have devised a system to pick a winner of our national championship from seven entrants that was slightly less pedantic and involved?  Just saying!
Posted by Robin Copland at 20:21

Behind the Glass is a comment column about curling in Scotland. It is written mostly by Robin Copland, with contributions from others. 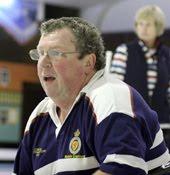